Since the beginning of the last century, Peroni has been designing and manufacturing steam driven pumps used for boiler feed service, low NPSHA pump-out service and for other process applications in Petrochemical Plants and in Refineries. All Peroni steam driven pumps are reciprocating, horizontal duplex, double-acting pumps where the power is directly transmitted to the liquid end by the action of the motive fluid on the piston. The motive fluid is normally steam, but can also be air or gas. 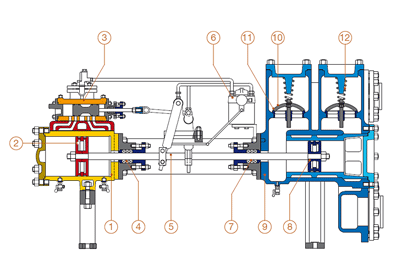 The steam end is substantially an integral two cylinders reciprocating steam engine.
Each cylinder houses a steam piston which is connected to a slide valve by a rod and levers. The inlet and the outlet of the steam end are controlled by the slide valve. The steam enters at one side of the steam cylinder through the slide valve and pushes the piston towards the opposite side.
As the piston reaches the end of the stroke, the slide valve reverses the steam flow, which reverses the piston movement. The speed and consequently the number of cycles are strictly proportional to the amount and to the pressure of steam admitted. This speed is regulated by controlling the steam inlet valve.
The steam piston is sturdily connected with the hydraulic piston or plunger that acts on the fluid in the liquid end.

Steam driven pumps use as displacer either a piston that is sealed to the hydraulic cylinder by piston rings, or in case of high discharge pressures, a plunger with packing.
Double-acting means that during pump operation, the fluid at one end of the piston is in the suction phase while the other end of the piston is in the discharge phase.
Therefore, a double - acting pump makes two suction and two discharge strokes for each complete reciprocating cycle and has two suction and two discharge valves.
The valves installed on the liquid end are either wing type for clean fluids with low viscosity, or ball valves for fluids having high viscosity and/or containing solids. The piston rod packing prevents liquid from leaking out of the hydraulic cylinder.
All models can be supplied with a stuffing box cooling jacket on the hydraulic side.

The direct-acting steam pumps are very flexible machines. They can operate at any point of pressure and flow within the range of characteristics of the particular pump design.
The speed of the pump, and therefore the capacity of the pump, can be controlled from zero to maximum by a manually or automatically operated throttling valve on the steam supply.
The maximum speed is mainly limited by the frequency with which the valves will open and close smoothly.
The pump can operate against any system counter pressure, from zero to its maximum allowable working pressure.
In a specific application, however, the hydraulic end maximum pressure may be limited by the available steam pressure and by the ratio of the steam piston and liquid piston areas.
A common characteristic of both Vesuvio and Vulcano steam driven pumps is the very low value of the NPSHr.
In fact, the liquid end of these pumps is designed to maximize all the passages of the fluid flow, specifically in the valves area. Additionally, the pumps are always selected to operate at a very low speed.
For this reason, one of the main applications of the steam driven pumps is the pump-out service in the Refineries, where the NPSH available is often low and the fluids handled are miscellaneous hydrocarbons often with high viscosity and high temperature.

Connect with us Find out the price


To meet the requirements of the oil and gas and hydrocarbon processing industries, Peroni manufactures a complete range of triplex, quintuplex and septuplex reciprocating power pumps, designed according to API 674 standards.

All Peroni pumps are manufactured under a rigorous, proven quality assurance system certified to UNI ENI ISO 9001 quality standards and Peroni are also certified according to ISO 14001:2004, BS OHSAS 18001:2007 and GOST R.

×
In ASCO PUMPS you can not only order and buy steam driven pumps in Uzbekistan, having received favorable prices + guarantees, but also take advantage of the full range of services, including: Delivery + Installation + Service + Equipment repair.